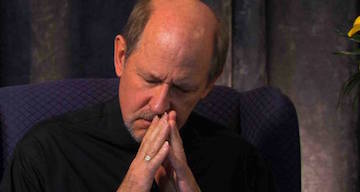 "God has spoken again. The Messenger is in the world." [2]

An Angelic Assembly exists wherever life exists to oversee each world, translating the will and intention of the Creator, for the advancement of all life. Marshall Vian Summers comes from the Angelic Assembly overseeing Earth. [4]

"The Angelic Presence wants the world to know that one of their kind is in the world, sent here to receive God's New Revelation for humanity." [5] 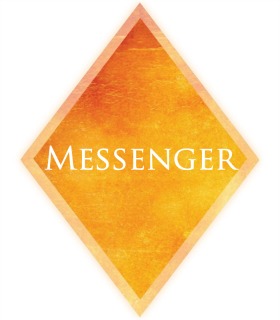 "There must be greater clarity about what you are dealing with and will have to face in the future."... "You must hear this with your heart. Do not delay, for every day is important now. Time cannot be wasted now. The Messenger is here. He will not be here forever. You are blessed to hear him and to meet him if possible. He carries within him the Revelation, beyond what is produced in a book or a recording. Receive him. Hear him. And your life will demonstrate the proof of the truth that abides with him, in him and through him." [7]

The Time of the Messenger: the Time of Revelation

"It is important that you know of the Messenger because if the Initiation occurs while he is in the world, then your opportunity becomes greater and more significant. It would be a great misfortune for you to miss him while he is here. The Revelation only comes every few centuries, or perhaps once in a millennium, and you happen to be here at that time. From Heaven’s perspective, that is a great blessing, a great opportunity." [1]

"This is the time of Revelation. There is a Messenger in the world. He brings a Revelation unlike anything that has been given before, speaking of greater things that were never considered or needed before. He brings the clarification of spirituality at the level of Knowledge. He speaks of that which has always been true and of that which has never been considered." [9]

The Responsibility of the Messenger: A New Messenger for a Changing World

"It is at this great threshold in humanity’s history that a New Revelation has been sent into the world, and a Messenger has been sent here to receive it, to prepare it and to present it. For him, it is a long journey, a long and difficult journey." [10]

"Before he was sent into the world, the Angelic Host prepared him and placed deep within his mind the awareness and the understanding that he would later bring into the world—Knowledge and wisdom from the universe, from the most advanced races in the universe; an understanding of the future of the world and where humanity is heading in its evolution and all of the great hazards and risks associated with this; a greater understanding of human relationships that would give him a greater maturity as he would grow up in the world. These are all placed deep within him, beneath the surface of the mind—later to be discovered, later to emerge and later to resonate with the Revelation itself. For the Revelation would not be foreign to him because of what has been given to him before he came into the world." [11]

see also The Responsibility of this Messenger

Only One Messenger of God 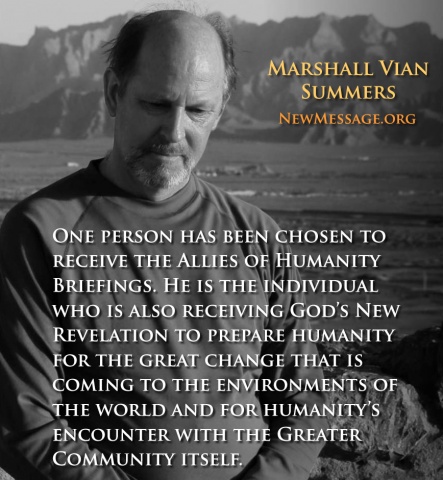 "The Revelations are always given to one individual, so there is no confusion. There are no different versions. There is no competition between different individuals who make the same claim and proclamation. It is always one individual with the assistance of certain courageous people that can bring a new awareness and reality into the world. Every age has its prophets, but Messengers only come infrequently to alter the course of human understanding, awareness and destiny." [11]

"A Messenger has been sent here to receive the New Revelation and to carry it forth into the world and to build its essential community so that its purity and its efficacy can be assured." [12]

Recognizing the Messenger from God

The Messenger's "life has been inexplicable. His presence is inexplicable. You must see with clear eyes and listen with a deeper hearing to recognize these things. The burden then is upon the listener, upon the recipient." [11]

"There will be those who can recognize the Messenger immediately, but for most others it will have to be learned through time and demonstration, for they have much to clear in their own minds before they can see something of this magnitude. They will want proof in various forms, and some of their expectations will be met and others will not, for God is not bound by these things." [3]

"The Messenger now will need great assistance from others to bring this New Message into the world. It is not something one person can do. It is not something a small group of individuals—committed as they are, devoted as they are—can really do. It is going to take the assistance of others. It is going to take people learning The Way of Knowledge, learning the New Message, living the New Message and seeing its complete relevance to the world that you see and its complete relevance to the world you have not yet seen. The Messenger will need protection. He will need true students. He will need supporters. And he will need others to simply bear witness to this great event in human history." [14]

"The Messenger is an older man. He will only be in the world for a few more years, perhaps. If you can meet him and know of him, it will be a great blessing for you."[16]

see also The first to respond

"If he is rejected, human civilization will begin to decline—as the rivers dry up, as the planet becomes intolerably hot, as the crops fail, as great numbers of people are forced to flee their homeland. "[17]

“The discouragement, the disappointment, the projections of evil and blame upon the Messenger will be heaped upon him as he proceeds. Even now he stands at the threshold of an unwelcoming world, seeking those individuals who can respond, who are ready to be amongst the first to receive the reality that God has spoken again.” [18]

"The Messenger will be denied. He will be ridiculed. Others will attack him. Others will feel threatened by his presence and his proclamations—not because he is wrong but because they cannot face the fact that God has spoken again. They do not have the courage or the humility to reconsider their position, their ideas or their previous investment in themselves." [11]

"You will see that the Messenger will be judged. He will be condemned. Others will make it their purpose to destroy him. Learn the lessons from the past in this regard. He is not simply here to sacrifice himself so that other people can create a story about him. He has his own story—a story of the Messenger, a story he is too humble to speak of, a story that must be revealed to all who can hear and understand." [11]

"God has sent him here."... "Do not dispute this on religious grounds, for you cannot determine what God will do or when God will speak." [19]

"The challenge is upon you, then, for the Messenger is not here to prove himself to you. You must prove yourself to him and to those who sent him. Deny him, and you deny those who sent him. You deny the Lord of the Universe to protect your religious ideas, your social ideas, your political ideas, your grievances, your fears, your condemnation of religion, your pride, your arrogance, your ignorance, your stupidity without even looking to see what the Revelation really is."[9]

Expectations Placed Upon a Messenger from God

"People will consider the Messenger and think he must be powerful and produce miracles. He must be able to be flawless—without sin, without stain, without error, loving and compassionate to everyone all the time. Yet the real Messenger is a human being—fallible, prone to error—and yet strong, committed and dedicated."[20]

"People want the Messenger to be many things, to meet their desires, their beliefs and their preferences. But the Messenger has been prepared by Greater Powers and sent from the Divine to be in the world according to a Greater Plan and destiny. Be careful then in how you approach this rare and significant individual. Be careful regarding your expectations, your beliefs, your preconceived ideas, your judgments and your grievances. For these can all blind you to who he is and to what he can offer to you and to the whole world." [11]

"People may want many things from the Messenger—hoping for dispensations, for miracles, hoping to believe in someone supernatural, hoping to have their life be enriched by his presence and his work. They will be disappointed as have the previous Messengers disappointed many people. That is why Messengers are denied, rejected, avoided and, in some cases, destroyed because the people do not get what they want. They only receive what they truly need." [1]

The Character of the Messenger

The Circle of the Messenger