"People may think God is great and inexplicable, but they try to use God as a kind of servant, an errand boy for their desires, their wishes and their difficulties."[1]

"Religion has become a palliative. It has become a distraction more than an illumination. It has become something that people [use to] run away from the world to seek comfort and consolation instead of a preparation to engage in the world in a greater and more profound way." [2]

"It does not matter that the theologians came and constructed wonderful belief systems for their own survival. It does not matter that the thought system that was a result of that giving calcified and became a restraint for people. That always happens. When Knowledge disappears, thought begins. When people can’t know, they invent things to give themselves temporary stability to allay their own anxiety." [3]

"It is as if the unreligious have taken over the business of religion for their own purposes. Never having realized its essential purpose and meaning, they have turned it into something else. It is like now a political party, and of course religion has political aims as well. This is so far apart from God’s initial impulse and intention for religion—to keep Knowledge alive in the world, to teach The Way of Knowledge, to encourage human responsibility and ethical behavior, not simply as a prescript or as a requirement for admission into Heaven or some other exalted future state."[4]

“Religious tyranny will become very evident in the world in the years to come. This is the result of people holding to an absolute idea in a relative reality. It will breed violence and hatred—everything that is counterproductive.” [5]

“So you have a world that is religious, but knows not of religion. You have a world where religious institutions and their advocates clash and compete with one another, not realizing that the Source of their faith is the same. They will have people demanding and expecting adherence to ideas and beliefs and admonitions, but who themselves have never received the real initiation into the mystery and the power of the Presence.”[4]

“Religion has become concrete. It has become political. It has become an economic and social power that seeks to preserve its status and its power at whatever cost. So those who are truly responding to religion’s true purpose now find themselves in exile, now find themselves heretics and visionaries, following the Mystery—a Mystery that has been lost to so many in the religious orders and institutions. It is as if religion has become the enemy of what religion is really for. It is now the religion of the state, religion of tradition, religion of history, religion of fixed ideas, fixed beliefs and exclusive claims of authority. So far this is from the desire and intent of the Creator to keep Knowledge alive in the world.”[4]

"Those who would take up the sword in the name of God or for political advantage will have failed their mission and calling in life, and they will lead others to failure as well. Within this failure, there will be no peace and no resolution, for they will have denied the Knowledge of God within themselves. They will have denied the Plan of the Creator for humanity. They will have turned themselves against the greater wisdom that God has placed within them and within all hearts. They will have, through ignorance and arrogance and vanity, destroyed their great opportunity to make a real contribution to their people, to their nation and to the world."[6] 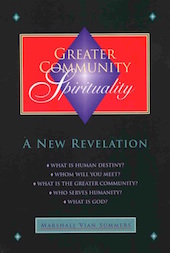