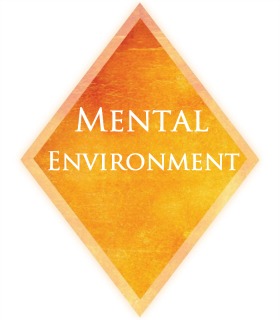 "Advancing societies must learn something about the mental environment if they are to effectively compete, relate and deal with other races."[2]

"You live in a mental environment as well as a physical one. The mental environment is filled with forces and thought forms generated by thinking beings everywhere,"... "an environment that is created through the predominating thoughts and interactions of the people who dwell there."... "Out of doors, the mental environment dissipates, though places in general can have an overall feel to them, depending upon what has occurred there in the past and what the prevailing ideas are in that particular location." [3]

"The mental environment is something very new to human understanding. The mental and physical environments are not the same. They operate on different levels of existence and follow different laws. They overlap tremendously, but you cannot take the principles of one and apply them to the other."[2]

"The Mental Environment is the arena of influence. People know very little about it, but it is very important in Greater Community interactions, particularly between races or organizations that compete with each other. They have to spend a great deal of time trying to discern what the other is going to do and trying to influence the other in subtle ways. This does not happen through technology as much as it happens through consciousness, through awareness, through the projection of thought and through cunning activities."[1]

Intelligence in the Greater Community

"While humanity is now dazzled by its advances in technology, it has yet to learn the greater powers that exist in the mental environment, powers that will exceed your technological abilities. " [4]

"In the Greater Community, cultures and races that travel often utilize a pooling of intelligence called group mind, they can exert tremendous influence." [7]

"In the mental environment, your minds can be read and understood, for you have not yet developed the ability to shield your thoughts, which will be necessary in the future if you are ever to compete successfully with Greater Community forces."[8]

"People around you will affect the mental environment for you. Because of this, you must become very selective about who to be with and what to say. Do not see this as a constraint on your freedom, for this is protecting an emerging awareness that needs protection in a world where it is not valued or honored."[9] 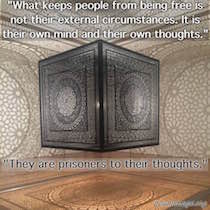 "In the mental environment, you have to learn how to shield your mind. Others who have skill here are able to do this – to block intrusions, to block potent forces, to block thought forms that are projected at one and to maintain one’s awareness if one is being affected by technology, by forms of radiation, by scanning and things of this nature."[4]

"Our thoughts are private. Knowledge has taught us how to keep our thoughts private. And the Great Presence—whom we call the Teachers, whom you might think of as an Angelic Presence—has enabled these communications to Earth to take place, free of any technological interference or interception." [10]

"If all of a sudden you became aware of all of the communication that is occurring in the mental environment around you, you would likely go insane. It would be too much stimulation for you. It would be too confusing. You would not be able to escape from it. This awareness would be very damaging to you because you do not yet have the capacity to participate in this communication consciously or to understand it or to integrate its meaning. This requires a very developed mind to be able to do this—a mind that is capable of experiencing prolonged periods of stillness and observation without judgment, a mind that is not driven by ambition and desire, a mind that can be calm and observant, a mind that can wait for answers to emerge rather than inventing them for its own self-satisfaction or sense of security. You do not have this mind currently, though it is possible for you to attain it over time." [12]

"There are greater powers in the mental environment that are extremely dangerous, and you must have the guidance of Knowledge to know when and where and how to apply yourself here. There are powerful individuals beyond your visual range, beyond your sensory perception, who you should not be in contact with under any circumstances though they may appear to be very alluring and powerful." [13]

Being a force for good in the Mental Environment

"Concentration is power, and if you are this concentrated, if you have brought all of your inner resources together, and if you are being guided by Knowledge, which is the greatest power, then you will be a force within the mental environment and will be able to help free others from the oppression of all the conditioning that overlays the mental environment of humanity." [14]

"Give yourself completely into stillness and silence. Give of your heart and give of your mind. Give all that you realize you can give, for this is a gift to the world. Though you cannot as yet see the result, have confidence that this giving will extend beyond your own mind and will touch all minds in the universe, for all minds are truly joined in reality." [15]

"In the mental environment, Knowledge is critical. It is the greatest power—greater than technology, greater than group mind."[17]

"A library at a university has a very different feeling than a library in a city community. It is a concentrated and focused learning environment. It may be easier to study in the university than it is in a public place."[2]

"If you go to a place where everyone is focused on a sports event, it can be much easier to enjoy it and participate in it than it would be watching it on the television. This represents a mental environment. People are together thinking about something in common. This creates a potency or a force in that environment, a force that will affect you greatly."[2]

"For example, if two different beings from different races are interacting and they wish to influence each other, they both have certain skills. They both can feel when they are being scrutinized. They both can feel basic efforts at manipulation or influence. Therefore, they must utilize skills that are far more subtle."[19]

"People underestimate the power of their environment and their relationships to influence them and to dominate them. But nothing grows in poor soil, nothing thrives in impure waters. You cannot begin a new journey in life if you are held in place by your former life."[20]

"There is a way to Knowledge. The way will save you time because you need to save time now. You are needed in the world, and your preparation must become accelerated. You do not now have the luxury of endless exploration and diversion, for the world needs you. It is emerging into the Greater Community. This is not a time to fiddle with your mind or your emotions or play around with different therapies or modalities because The Way of Knowledge is being offered to you. You are needed in the world. It is time to prepare. It is time to become focused and determined. There is no escape from this, for only those who are developed in The Way of Knowledge will have capability in the future and will be able to maintain their freedom in a Mental Environment that will be increasingly influenced by the Greater Community."[23]

"Your Spiritual Family beyond the world is supporting your spiritual development by communicating to you through the Mental Environment." [23]

"This is how a new fabric of unity is established. The great tapestry of life is woven strand by strand, person by person. Do not think another will do this for you. Do not think such great things are only left up to people who are great, who are heroes or heroines, for this is your responsibility. This is your calling—not to gain spiritual immunity, not to become all knowing or all powerful, but to join your mind with other minds in Knowledge, to become stronger than you are or ever could be as an individual. The Greater Community is made up of communities. That which is powerful in the Greater Community is communities. Your mind alone, no matter how developed, cannot contend with a community mind. That is why we teach the Four Pillars of life, so that you have the basis for learning how to join with others—genuinely, truthfully, honestly, effectively. We do not send you off on your solo pursuit for spiritual enlightenment. We bring you into the world and teach you how to engage with others and join with others to bear fruit here within the world." [23]

"Nations in your region of space have security forces and can amass together a great military power, but this is only for the mutual defense of their trading networks. They have realized that they cannot overwhelm each other by force, and so they seek to influence each other through persuasion and thought. This represents a more mature use of power in the universe and a new threshold of learning for humanity." [24]

"Any human mind can be interfered with, and its understanding can be extracted by those intervening forces in the world now. Therefore, you must understand the importance of discretion. That is why it is one of the three requirements for establishing and maintaining freedom in the universe: unity, self-sufficiency and discretion. You are only at the beginning of learning about the power of the mental environment. You are only beginning to learn how other races can gain access to human wisdom and understanding. You are only beginning to realize how much your freedom will have to be guarded and protected if it is to be sustained in a universe where freedom is rare." [25]

"Think of the mental environment like this: a highly-charged field through which electricity flows in a myriad of ways. Though it appears to be random and confusing, it is following natural and significant patterns in life. Or, think of it as a great electronic circuit board through which electricity flows from one thing to another in ways that are pre-established but which would seem confounding to an observer."[26]