"We were served. Therefore we serve."[1]

The Creator of all life has asked humanity’s allies to send wisdom to the world in a set of briefings.

"There is no attempt to induce us with promises of peace and technology and spiritual enlightenment. Here there is no presence in our world acting surreptitiously in secret. It's just an honest communication of sending their wisdom, without interfering in our affairs. This is ethical contact. Anything beyond that is not ethical contact. It would only be done out of self-interest. All intervention is done out of self-interest." [2]

"God has called upon those few free races in your region of space to witness the Intervention and to send their testimony and their Briefings to help prepare humanity." [3]

"You have the possibility of having great friends if you can be pure of heart and if you can focus your service not only on meeting the needs of humanity but on developing relationships with other races." [4]

Allies of humanity inform only

"Your allies abroad will only seek to alert you to the presence of the Intervention and to teach you some vital and important things about life in the universe around you. But they cannot prepare you for the Greater Community. They are only playing a very small part in this."[6]

"We represent several races joined together in our small alliance to support the emergence of Knowledge and Wisdom in the universe, particularly with races that are on the threshold of emerging into the Greater Community. These emerging races are particularly vulnerable to foreign influence and manipulation. They are particularly vulnerable to misunderstanding their situation and understandably so, for how could they comprehend the meaning and the complexity of life within the Greater Community? That is why we wish to play our small part in preparing and in educating humanity."[7]

"The Creator of all life is creating and sending a New Revelation. And you have allies in the universe who are not allowed to interfere with your world, but who have sent information in the form of a set of Briefings to help prepare humanity to learn how to establish its own rules of engagement with intelligent life and to emphasize the need to establish your own ethics of contact."[8]

"Be glad that you have allies in the Greater Community, for allies you will need. You are entering a greater universe, filled with forces and influences that you have not yet learned how to counteract. You are entering a greater panorama of life. And you must prepare for this. Our words are but part of the preparation. A preparation is being sent into the world now. It does not come from us. It comes from the Creator of all life. It comes at just the right time. For this is the time for humanity to become strong and wise. You have the ability to do this. And the events and circumstances of your life create a great need for this."[9]

Allies do not interfere

"We are not here to lead you or to be leaders for humanity. Humanity must have its own leaders."[10]

"Humanity has a few allies and many competitors. But it is important for you to understand that your allies will not come here to defend the world, for they too must live with great discretion. And they realize, because they are intelligent and wise, that they cannot control the world, and if they attempted to do so, it would only lead to domination. That is why no free race is in the world today interfering in human affairs."[6]

"Those who are allied to humanity, the free races, they will not intervene here, for intervention to them is a violation. They realize that even if they could gain your confidence and trust, they would have to maintain a controlling presence here in order to guide you into the Greater Community. And this, they cannot do. They realize that humanity will have to struggle, and suffer even, to come to a point of recognition and responsibility regarding its future and destiny here. They will send their Briefings, the Briefings from the Allies of Humanity. This they have done as part of God’s New Revelation, for the Creator knows that you must realize that you are not totally alone in the universe and that freedom and self-determination exist and have been achieved by others."[4]

The Allies and other alien races in the Universe

"Humanity has allies abroad in your vicinity of space, who understand your plight and who value the fact that humanity has kept religion and spirituality alive in the world, and that the human family shows a greater promise – a promise that has been lost by so many advancing races in the Universe."[11]

"Only your potential allies in space do not seek advantage here. Their interest is largely geared toward their own security and their natural inclination to serve a talented and gifted race such as humanity."[8]

"When you read the Briefings that have been sent from the allies of humanity, you can recognize the intention behind their communications. It is inspiring. Even though their message is difficult to receive and may frighten your mind, it is inspiring because of the Knowledge that it represents and the high regard for humanity this represents."[12] 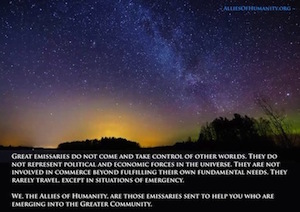 "That is why the allies of humanity are seeking to encourage the preservation of freedom and the awareness of a deeper Knowledge within the human family. They want to have other free nations in their region of space, not because they are in love with humanity as much as for their own stability and security. They have a natural interest in promoting freedom in the universe, and to have another free society in their general vicinity is of great importance to them. They also see the value and the potential for humanity to evolve into a very magnificent race where individual capabilities and the benefit to society have great advantages."[13]

"To serve you, there are races in the Greater Community who can respond to the Harim and who are influenced by them. They do not represent military forces or world governments necessarily. They are your potential allies, but they cannot become directly involved at this time."... "These great friends come with good intentions, not to exploit you, not to control you, not to gain access to your resources, not to influence your development, not to colonize you and not to take you over. Can you have this same approach with them?"[4]

Names and places of origin

"Many people have asked about our names and our identities, where we have come from, and so forth, as if they must know these things in order to trust our words. But we cannot impart them, for we must remain hidden or we will be in great danger, and your allies who have sent us to be near the world will be in great danger as well. The trust must come from a deeper understanding. It is not information you need as much as perspective. If you cannot see the situation clearly, what good is having more information? If you cannot know the truth in your own heart, what will the information provide for you? You need a little information. You need a lot of perspective. And you need a lot of courage."[14]

"There are people who cannot tolerate the mystery and must have answers, thinking answers will resolve their inquiry. These people will constitute the majority of people who inquire about The Allies Briefings and who will question you about it. You, personally, cannot answer all the questions there are about the Allies— who they are, where they come from, how they got here, their method of propulsion, where they are hiding and how they communicate. How can you possibly answer all these questions?"[15]

"Some people will complain, 'Well, they do not give us answers. They do not tell us dates and facts and figures and locations.' That is not what is important. It is the understanding, the perspective, the higher consciousness that are critically important. Who cares where the Allies come from? The names of their worlds would be meaningless to you. You are not going to be able to go there for so long! Certainly not in your lifetime. The Allies are providing what is important for you to know about the Greater Community and about the Intervention. They are telling you who is here, why they are here and what they are doing. They are pointing the way to what must be done to counteract this Intervention, which includes the development of Greater Community awareness and a higher consciousness."... "Some will say, 'These Allies don’t even tell us their names or how they got here.' This is stupidity! If God sends an emissary, do you deny the emissary because he does not answer trivial questions? God has sent the Allies here to help educate humanity and to warn humanity of the grave risks that it faces at this time. Is this going to be denied because some trivial information is not provided?" [15]

“In our first two sets of communications to you, we were able to be in the proximity of your world in a hidden location in your solar system. But now we have been forced to flee, since our revelations have become public. The Intervention that is occurring in your world by those extraterrestrial races who would seek to take advantage of a weak and divided humanity have searched for us, seeking to find us and to destroy us so that we may not report on their activities in the world and thus reveal their hidden plans and motivations.” [16]

"Many years ago, there was an attempt on our part to reach [Marshall Vian Summers] directly. He was called to a location in a mountainous area and was prepared for his contact with us. Several members of our party made the dangerous journey into this world, but unfortunately their mission was never completed. Once they were discovered by the Intervention, they had to destroy themselves and their craft, leaving no evidence behind of our presence in the world. This marked a great failure. And the loss of four very precious individuals. There are only five of us left now. And we again are facing great danger." [17]