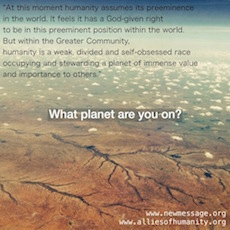 “Humanity cannot now advance because of a rare individual here and there. Many more people must be called by God, must be inspired and must function from a level of compassion, commitment and courage—not because they want it personally, but because it is emerging within them.” [2]

“The future of the world will be dependent upon how many people can respond and follow the power of Knowledge within themselves. They will come from all walks of life. They will come from the slums and the middle class people and the wealthy. They will come from all cultures, from big cities, from small towns, from villages, from farmers and shepherds and from people living in far-flung places of the world. It is the New Message that must activate Knowledge within them, give them the possibility to develop an inner life so that they may respond to the reality, the power, the guidance and the presence of Knowledge.” [2]

"If you could understand the evolution of life in other worlds, you would see how much humanity has achieved, despite its many errors. You would see that religion in this world has actually gone very far." [1]

"Despite humanity’s long existence in this world, you are a young race—immature, unwary and unsuspecting. You have many great qualities. You have kept spirituality and creativity alive in the world, where they have died in so many other worlds—advanced technological worlds that are sterile and secular, where individual freedom is unknown. You have great promise. But you have great problems, and you have some disabilities as well—the tendency towards human denial. And your tribalism, which has served you in the past, can blind you now." [7]

"Humanity is still brutish. It still thinks the use of force is the great way to achieve your goals." [8]

The plight of humanity

"Humanity does not have much time to prepare and to determine what kind of future it will have."... "You do not have decades to consider these things, for you have set in motion change in the world now that will accelerate and will be beyond your control and is even today beyond your control." [9]

“Humanity has a great choice it will have to make. This choice will have to be made not only on the level of leadership of governments, but also at the level of every citizen. And that choice is whether humanity will fight and compete for the remaining resources or whether there will be a greater uniting and cooperation for the benefit of all. Neither option is easy, of course, but it is a definitive choice.

It is as if humanity were at the point of choosing the high road or the low road—a path towards unity, cooperation and mutual benefit or a path towards conflict, war and decline.”[10]

Humanity as viewed from the Greater Community