"Affluence will fade in the world. It will be lost by many people. The human need will become so great that it will call upon people everywhere to serve and to participate. The ship is already taking on water, you see. It is already beginning to list to one side. Those who know this are being called to respond, to prepare themselves and to see where their contribution can be of the greatest benefit." [1] 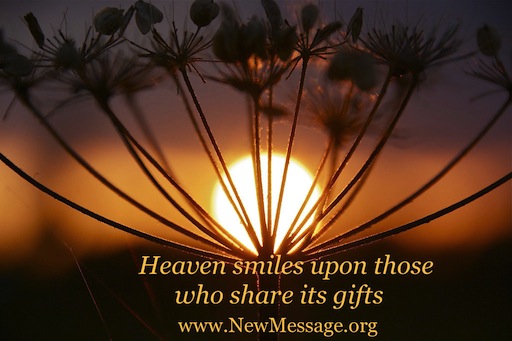 "Wealth is investing yourself in that which yields the greatest benefit for yourself and others." [2]

Directives for the Wealthy

"If you have a lot of money, become a benefactor. Give money to worthy people and worthy endeavors. The only value for having wealth is to be able to give it away." [4]

"The wealthy will have to take care of people." [5]

"Your richest person in the world should take care of thousands of people—feed them and provide for them!" [5]

"Do not ask anything of the world save what few material things you need to fulfill your function. This is a small request in light of what you have come to give. And if your demands are not in excess of what you need, the world will gladly render them to you in exchange for a greater gift which you possess." [10]

"The wealthy had best contribute most of their wealth to social welfare here because otherwise you will have revolution. The wealthy will be preyed upon, and there will be little to protect them."[11]

"My wealth is who I know and what I know." -Marshall Vian Summers[12]

"The rich may chase their dreams and dress themselves up, but inside they are living in poverty." [13]

"The power of force, the power of wealth, the attractions of beauty and charm ultimately cannot compete or compare with God's Power and Presence." [14]

"The poor are often more rich in spirit than the rich themselves, who have a great competing agenda differing from their primary purpose and function of being in the world." [14]

"Your real wealth is discovered through the reclamation of Knowledge. It is not counted in how many assets, friends and pleasures you have acquired in life. All of these are constantly threatened and are easily lost. But the reclamation of Knowledge cannot be lost unless it is neglected or denied, and even then it will abide with you and go with you wherever you go." [15]

“You need not be poor, for poverty is not of your heritage nor of your true destiny. Do not be poor today, for Knowledge is the great wealth, and once it is allowed to emerge within any mind, it begins to generate its presence naturally in the world. It begins to balance and harmonize the mind that is its vehicle, and it begins to give specifically to certain individuals in certain ways. This is the genius that is with you.” [16]

"As long as you are drawn by beauty, wealth, and charm, you do not yet have the discernment to see what is really meaningful and important." [17]

"If you live beyond your means or you try to earn wealth without real labor, without producing things of value, then you will end up in jeopardy and even calamity."[18]

"God pities the wealthy who cannot find the gift that their relative freedom would provide. They can be more tragic than the poor, whose needs are evident and more easily fulfilled."[20]

Quotes about the Wealthy

"How many saints have arisen from the slums and the wretched conditions of humanity? Poverty is a better breeding ground for sainthood than wealth and affluence." [21]

"But humanity has created a style of living that far exceeds the carrying capacity of your environment and which places you out of balance with the natural world, and even places you out of harmony with your own nature. Now you are driven to excess—excessive behavior, excessive busyness, excessive use of the world’s resources, excessive indulgences. Your relationship with time has changed. Your relationship with nature has changed. And your relationship with one another has changed. Now you are busy trying to sustain a lifestyle that deprives most of the human family—where the very rich are driving the engine of war, robbing nations and peoples of their own sustaining resources, driving headlong as if you did not have a future, as if you did not care, under a whole array of assumptions that somehow your technology and your cleverness and ingenuity will find a way to keep it all going. You have abandoned your relationship with nature. You have taken a mistress of technology, forcing a kind of adultery that has set you out of accord with yourself, with one another and with your environment. And God will not intervene to stop all of this." [23]

"Has it not been curious to you that as your life becomes easier, you lose vitality?" [24]

"The highly educated, the highly sophisticated—people who indulge themselves in ideas and beliefs and social trends—have a great difficulty, whereas a simple poor person can respond more immediately. It is a curious thing that the more that people have and pretend to be, the more difficult it is for them to have this clarity, this simplicity, and this honesty." [25]

"People who give themselves to accumulating wealth and accumulating possessions find a great emptiness there, as if they were hollow on the inside. Now they become caretakers of their possessions, as if they were museum keepers of all the things they have collected in their lives, but as individuals they are hollow. There is nothing inspiring about them. There is nothing really important that has come out of them. They have not found their greater purpose in the world." [26]

"Goaded by the fear of poverty and deprivation, people are driven to seek endless amounts of wealth and reassurance for themselves. This is pervasive in the world. This is the condition of the human family. This is the 'state of the union' for the human family. And all of the addictions, all of the depression, all of the poor mental and physical health you see around you is a product of this desperation and this disassociation that people have with themselves and with the greater purpose that has brought them into the world." [27]

"Look at the very wealthy with pity, for they have lost contact with the power of Knowledge in so many ways. And those that have rediscovered Knowledge will naturally become benefactors for humanity, for anyone who has great wealth must become a benefactor to humanity. Some people were sent into the world to do just this."[11]

"In the new world, cooperation will become ever more essential—to save the lives of people, to meet ever-increasing emergencies, to respond to the changing environment and the changing conditions of life. Here the rich must give, or they will risk losing everything." [22]

“You will not have the wealth or the social power to do the things perhaps you could do before, if you were living in an affluent nation. People do not make this association. They do not see that plundering their world’s resources is actually creating the very set of circumstances that will rob them of their personal freedoms and advantages.” [28]

"The very rich will have to give up their very silly little games, their indulgences and addictions, to really get out and help people. Otherwise, they too will be overthrown. The anger towards the rich will become so severe that the rich will have nowhere to run in the future if the world goes out of control." [29]

"The richest amongst you must be prepared to take care of people, for there will be great human need in the future, greater than you have known, greater than that occurs even at the moment. Your richest person in the world should take care of thousands of people—feed them and provide for them. You have already destroyed their livelihood. It is impossible now for them to farm their land. Their local resources have been depleted, the land has been set to waste, so it is now your job to feed them and take care of them. That will be your job. And if you are to generate more wealth, it will be for this purpose." [5]

"There must be a great sharing here, a great compassion here. Here you do not throw the poor some pittance, some little excess of your wealth. For there will be poverty of a very grave nature as nations fail, as agriculture fails, as people cannot afford their food, as essential energy becomes rare and inaccessible to many people. Take 20% of your wealth and spend it on taking care of people. That is what the future will require if humanity is to have stability and if humanity is to avoid the ravages of war and deprivation, hunger and starvation." [5]

"What can God do for you but encourage you to be of service to others? That is the redemption for the wealthy. They have given themselves to their pursuit of power, pleasure and recognition, but God gives them the opportunity to serve others. Not just to give some little portion of their wealth as a charity, but to give the bulk of their wealth to serve a real set of needs in the world. That is the path of redemption. Even if they missed their calling earlier in life, this will redeem them—service, selfless service, born of a deeper inner need, not as an attempt to quell guilt or inadequacy, but as something that naturally emerges from within them." [30]

“Here it is all right to be wealthy as long as you are willing to give away most of your wealth, to become a benefactor. For beyond your basic needs, why have all this wealth? For prestige? To impress others? To use it as a social power? To overtake others? Money becomes a god and a demon when it ceases to merely be a useful tool. Therefore, all the wealthy people should be benefactors. That is their role and responsibility. That is what will redeem them and prevent them from thinking that their wealth is their real value.” [31]

"Someone else’s life must be degraded to provide what you want at the price that you want to pay. You may think you are employing the world to meet your uncontrolled desires, but what you are really doing is destroying cultures and enslaving other people in conditions that you yourself would never tolerate or condone." [31]

"If you are wealthy, give generously to those who are securing the diversity and the health of the natural environment, for this is the environment that is sustaining everyone. Do not simply be like a locust upon the land, devouring everything in sight only to perish in the end when the food is depleted." [31]