From New Message from God Wiki
(Redirected from Poverty)
Jump to: navigation, search

"Most people do not even have enough to even live a balanced and harmonious life, so the more you want for yourself, the more you draw from the limited resources of the world, the more you deprive other people." [2]

“Every person is in the world to be a vehicle of communication and service. This is their greater purpose, but more than half the world is under the yoke of poverty and political and religious oppression. There are very few free nations in the world. People are circumstantially oppressed, politically oppressed, religiously oppressed, but the New Revelation is still for them, and for you—for the rich, for the poor, for the advantaged and for the disadvantaged, for the leaders of nations and for the refugees living at the edge of the city.” [3]

“So many of humanity’s future great leaders, scientists, physicians and inventors are bound by grinding poverty or oppressed in oppressive regimes, and their greater gifts will not be discovered and expressed as a result." … "Here is where poverty and oppression hold back the entire human race, diminish the prospects for the human family. This is why women must be free to assume positions of leadership and power and innovation, for if you suppress half of humanity, you deny all of humanity half of what it could create and produce that would be entirely beneficial.”[4]

"How many saints have arisen from the slums and the wretched conditions of humanity? Poverty is a better breeding ground for sainthood than wealth and affluence." [5]

"Many people will perish in the future, either through poverty and oppression or through ignorance and foolishness. Nations will be tempted to go to war with each other over the remaining resources, which will be ever more difficult to secure. And the grievances of humanity, so long standing, will flare here and there and everywhere."[7]

"Even if you were born under very difficult or deprived circumstances, there is still a recognition of gratitude."[8] 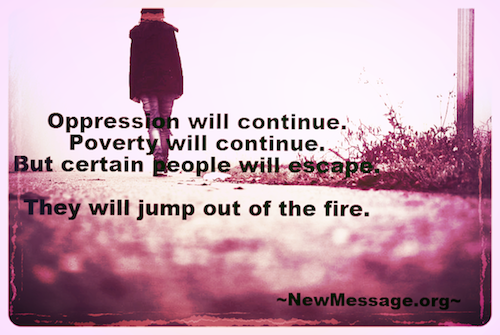 Poverty and the Poor

"If you failed because of poverty and oppression, there is no judgment against you for this. There will only be the desire to return and try again." [9]

"It would be so meaningful if people could trade places even for a short time. The very poor could live with the very rich and vice versa. And yet the rich suffer as if they have nothing." [8]

"God pities the wealthy who cannot find the gift that their relative freedom would provide. They can be more tragic than the poor, whose needs are evident and more easily fulfilled."[10]

Take Care of the Poor

"The richest amongst you must be prepared to take care of people, for there will be great human need in the future, greater than you have known, greater than that occurs even at the moment. Your richest person in the world should take care of thousands of people—feed them and provide for them. You have already destroyed their livelihood. It is impossible now for them to farm their land. Their local resources have been depleted, the land has been set to waste, so it is now your job to feed them and take care of them. That will be your job. And if you are to generate more wealth, it will be for this purpose." [11]

"There must be a great sharing here, a great compassion here. Here you do not throw the poor some pittance, some little excess of your wealth. For there will be poverty of a very grave nature as nations fail, as agriculture fails, as people cannot afford their food, as essential energy becomes rare and inaccessible to many people. Take 20% of your wealth and spend it on taking care of people. That is what the future will require if humanity is to have stability and if humanity is to avoid the ravages of war and deprivation, hunger and starvation." [11]

"The peoples of the world who cannot find shelter and food and security and sanitation, they all need assistance. It is the calling for the wealthy to provide for poverty at this level." [10]

The New Message for the Impoverished and Oppressed (April 18, 2008)