"The Greater Darkness in the world today is hidden. It is deceptive. It portrays itself as benign and beneficial. It encourages people to acquiesce to its presence and to share in its mission here. It is not a spiritual force. It is a physical force. It is not comprised of multi-dimensional beings. It is comprised of physical beings from the Universe who present themselves in such a way that people will think the 'visitors' are mystical, spiritual and have magical powers. The only powers they have are their technology and their ability to convince you through persuasion in the mental environment." [1]

"There is a reason that people cannot speak of these things in public because it has been discouraged in the social discourse. That foreign craft are flying in your skies is an undeniable reality, and yet people do not want to think of it. And if they do think of it, they want to think of it in a positive way—that something wonderful is happening, that you have visitors, and they are here to help you, to guide you and to prepare you to meet the difficult challenges emerging in the world today." [2]

"The alien presence in the world is growing. It is growing every day, every year. Many more people are falling under its persuasion, losing their ability to know, becoming confused and distracted, believing in things that can only weaken them and make them impotent in the face of those who would seek to use them for their own purposes." [3]

"Your world is being 'visited' by several alien races and by several different organizations of races. This has been actively going on for some time. There have been visitations throughout human history, but nothing of this magnitude. The advent of nuclear weapons and the destruction of your natural world have brought these forces to your shores." [3]

"Without the New Message from God, humanity would fall into grave conflicts and precipitous decline, making you vulnerable to foreign powers who are already in this world to gain influence and authority here. People do not realize they are standing at the precipice, not only of great change, but also of subjugation. This is the Greater Darkness in the world, a Greater Darkness that most people are too afraid to even think about. But it is something that humanity must prepare for, and that is why God has given a New Revelation." [4] 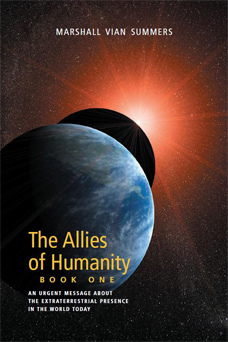 The Greater Darkness Upon the World