From New_Message_from_God_Wiki
(Redirected from Women)
Jump to navigation Jump to search

"You are entering the Age of Women. It is time for the emergence of women--of responsible, ethical, wise women." [1]

"Because the New Message from God has come through the Messenger, who is a man, should not discourage you from the Message that is being given here. For this man, this Messenger, recognizes the need for the power of women." [1] 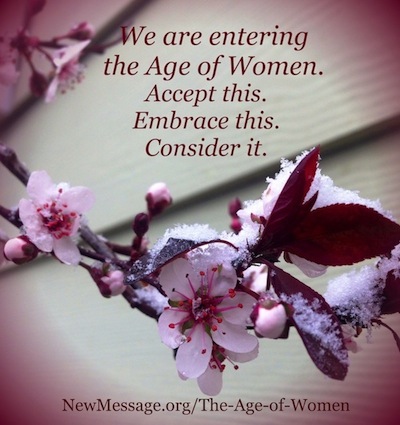 "We are entering the Age of Women. Accept this. Embrace this. Consider it. The New Message from God will teach you the great meaning of this and why it is so important for humanity at this point in its evolution." [1]

A matter of human evolution

"The wisdom of women must come to the fore if society is to advance." [1]

"In the past century, you have seen in all of society’s evolution, in many places in the world, the rise of women to roles of prominence that were previously only assumed by men. This is a natural evolution and should be continued." [1]

"The confusion about male and female roles, the masculine and the feminine, has led to a great retardation in human development and great abuse of people throughout the ages in many cultures. To limit women to child raising and domestic duties and minimal employment opportunities is a great mistake, and wherever that exists in any culture, that culture will suffer as a result." [1]

“Why has it taken humanity so long to really make advancements? It is not simply energy and technology, the limits there that have held you back. It is the restraint upon the roles of men and women. It is the weight of history and tradition.” [1]

Quotes about Women in leadership roles

“There are now heads of state who are women, but they are still blocked from becoming religious leaders in many, many traditions and in many cultures. They can become the president of a nation, but not a priest or a rabbi or an imam in many circumstances.” [1]

“There is a New Message from God in the world and one of the things that it calls for is the emergence of women leaders, particularly in the area of spirituality and religion. It is time now for certain women to be called into these greater roles and responsibilities, and it is important around the world in different quarters and in different religious traditions that this be allowed.” [1]

The problem with constraining half the population

“Not every woman is meant to be a mother in a household. To deny them their greater purpose and expression in the world is to deny humanity the benefit of their gifts and to imprison them. This was never God’s will and intent. Women were not created merely to be servants to men. They have their own purpose and destiny in the world.” [2]

"Holding back the creativity of women alone means that half of the human race is handicapped and restrained. Half of the great gifts of Knowledge—contribution, compassion and service—are denied the human family, denied for cultural reasons, denied because of poverty, denied because of oppression by powerful forces within government and even religion." [3]

"To hold women back and assign them domestic duties alone is a great mistake. It will deny the human family [of] far greater resources that would be available otherwise. To limit women to child raising and domestic duties and minimal employment opportunities is a great mistake, and wherever that exists in any culture, that culture will suffer as a result. Until recently, in most societies in the world, women were considered to be simply the possession of men - a valuable possession, but a possession, something you could buy or sell or trade or destroy - and that is one of the reasons that human civilization has progressed so very slowly." [1]

“The world today would look different if women were allowed to ascend. It would not be magically wonderful. It would have many problems still, but you would have fewer people in the world today and would be better prepared for the Great Waves of Change that are coming to the world." ... "And there would be greater and wiser leadership within the realm of religion and spirituality.” [1]

“The obstacles to taking the steps to Knowledge face men and women equally. But women, in most places, have a greater disadvantage in just the opportunities; the value of their Knowledge is not placed very high at all. They are merely being used as tools of their families, of their culture, of their villages, of their tribes, of their nations. This must change or humanity will not advance.” [1]

“Women must have greater power and recognition. Those amongst women who are destined to be great scientists, great political leaders, great teachers, great educators, great physicians, great social advocates, great philosophers, they must be allowed to arise. Otherwise, humanity is denying half of its population and denying the gifts and the wisdom of half of its population by assigning women a subservient role or a domestic role only. This has been a great hindrance to human progress and a great hindrance and denial of a greater purpose that has brought so many people into the world.” [2]

“Do not suppress half the human population or you will lose half of the creativity of the human family and half of the contribution that could be given to the welfare and to the advancement of humanity.” [2]

Gender roles in the Greater Community

"It will be interesting, perhaps, for you to consider that in advanced nations in the universe—advanced nations in the Greater Community of intelligent life in which you live—that where there is a distinction between men and women, or male and female, in those particular races, the races that are not androgynous in nature, the female is usually given priority in matters of conscience and spirituality." [1]

"In many advanced societies, as we mentioned, women are the priests; they are the religious authorities. The female, in this case, in races very different from your own, the feminine is recognized as being more receptive to the direction of Spirit, or God, while men in general - in most situations, the male aspect - are more competent in physical or practical measures. This is not simply a human phenomenon or a historical precedent within this world alone. It is something that holds true throughout the Universe." [1]

Quotes about Women and Men

Quotes about Women and Men In positions of power

“Over the centuries, men have been so afraid of the power of women and the possibility of women ascending within the society and culture that they really have denied themselves the assets and the benefits of these skills. And civilization as a whole has been retarded and restrained, its full potential not realized because of this.” [1]

“Women must become unchained and they must unchain themselves from pettiness and ignorance and arrogance. They must learn to control their emotions. They must learn the wisdom of discernment. They must have opportunities for education. They must gain greater responsibilities in areas that were previously denied them. There must be enough trust between men and women to allow this natural emergence to take place.” [1]

Quotes about Women and Men In partnership

“With women on the rise, men feel quite helpless and confused. Women outperform men in many, many ways. But women have weaknesses as well. Women for centuries have carried the flame of spirituality in the world. Now they must carry the responsibility. This is very different. Here they will be able to have compassion for men, for they will see why men’s errors and successes came about.” [4]

"In some cases this means that the woman, the individual, must go forth without a man, without a family. There are no guarantees in this regard. Your spiritual calling is your spiritual calling. You cannot make deals with it. Women who are called to a greater service must go unchaperoned into the future. They cannot take a man with them to protect them and to provide for them and to keep them small. Perhaps they will have a great partnership with a man and perhaps they will not. It is up to Knowledge and to their own individual design and calling. We make this point here so that women will understand that they are putting relationships with men ahead of their calling. This is one of the weaknesses that women have, which has been socially conditioned into them, but also represents just a normal human need. But sometimes even normal human needs must be superseded by a deeper spiritual, divine need. That must come first." [1]

"The great spiritual leadership in the time to come will be primarily given to women, for this is the Age of the Women. Part of the restructuring of society is for this purpose, and it is happening naturally. Therefore, many women will become true leaders. The disappointment for these women is that they cannot take men with them. These women I speak of who have a true calling to be spiritual leaders, rarely will they be able to take a man with them.That is part of their maturity. It is going unchaperoned into a greater life. Women want to find a man first and then go to God because they do not want to go to God without a chaperone.They want to have a man to make sure they will not be lonely. But how can you be lonely in God? God is like having all men at once! To lament not having a man when your heart is going for God represents confusion.Therefore, these women must be disappointed. No man? Go for God. Mourn for no man. Go for God. Don’t go for belief in God; don’t become a philosopher. Let God and your Spiritual Family fill your life.Then things will begin to happen. If you yearn for a man and a man is not there, you are wasting your life.You might as well yearn for something that is there. Not every woman will be with a man, not in the normal sense. And yet women will still need men very much because they will need to be nourished as women." [4]