There is a New Revelation in the World ...

"... unlike anything that humanity has ever received before." [3]

"... not only to prepare you for the Great Waves of change, but to begin to educate you about the nature of spirituality in the universe and the larger picture of your existence so that you can find your place within a far greater reality." [3]

"That is why your comprehension now must be greater. You must begin to think of things that you have never thought of before, to break down the distinctions you have made that have no place in a real understanding and to make new distinctions that must be made in order for the new understanding to emerge. It will take a long time for people to learn this, but even if a few can, it is a beginning." [3]

"God’s New Revelation will clarify the nature of human spirituality, which has been overlaid by culture, by convention and by political manipulation. It will make it clear that you are born with two minds—a worldly mind that is conditioned by the world and a deeper mind within you that is still connected to God." [5]

"The Revelation has been given with its own commentary and in such great detail and repetition that it will not rely so greatly upon human interpretation as have the previous Messages that have been given to humanity." [6]

"At every great time of Revelation, spread out intermittently over the course of human history, how many have failed to recognize the significance of the event that was taking place in their lives, at their time?" [8] 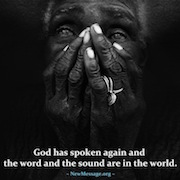 "If it is your destiny to receive the New Revelation, then you cannot find your calling anywhere else." [5]

"Even at this moment, there are millions waiting to receive God’s New Revelation." [9]

"Not everyone needs to respond, only a critical mass of people to turn the tide for the human family. You must be part of this." [10]

"Not everyone is ready to receive the New Revelation. God knows this and there is no condemnation here." [8]

"Once again, humanity is challenged with a New Revelation. Can it receive this? Can it comprehend this? Can it accept this, or will it fight and struggle and denounce and continue its violent and ignorant ways? Will the human intellect still try to replace the power of Knowledge within the individual? Will religion grow and expand, or will it contract and become self-defensive? Will people be able to change, to have a real change of heart to prepare them for the future and to assure them a greater life and a greater security in the world? These are questions that only people can answer." [12]

"The New Revelation is calling upon you to respond to Knowledge within yourself and to listen to the Voice of Revelation. You will have many questions, of course. You may have fears and suspicions. You may have grave doubts. That is all to be expected. But the challenge for you is, can you respond to the New Revelation? Can you hear the Voice of Revelation? Can you have the humility and the responsibility to see that you are living at a time of Revelation and what this might mean for you? What is your responsibility in this matter? What does this calling mean for you?" [13]

"People are obsessed with their needs, their issues, their longing and their desires. They do not see the movement of the world. For the world has changed, but people have not changed with it. And now you are facing a new set of realities. What will God say to this as people feel overwhelmed, as their prophecies for the future do not come true, as the return of their savior does not occur, as they believe that God is creating all these problems for them? The Revelation speaks to all these things, but you must be open to the Revelation, and you must face the prospect of great change, for it is upon you and the world, and it is going to move forward." [14] 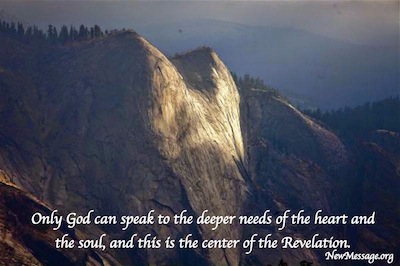 "People will argue, of course, unwilling or unable to reconsider their position and to open themselves to the New Revelation. They think they understand God’s will and purpose for the peoples of this world. They think they understand what Revelation means and when it can occur. They think they understand. But who can understand this fully? Who has the wisdom and the breadth and the capacity to understand this fully? Surely this must exceed human comprehension. And surely there must be enough humility and honesty for people to realize that they cannot predict when and how the Creator of all the universes will speak to this one tiny little planet. Human ignorance and arrogance unite into a dangerous combination, a combination that is vehement and oppressive. It is jaded and highly opinionated. It is polarized and will continue to divide the human family—a division that can only weaken you in the face of the great change that is coming to the world." [11]

"It is at this great threshold in humanity’s history that a New Revelation has been sent into the world, and a Messenger has been sent here to receive it, to prepare it and to present it. For him, it is a long journey, a long and difficult journey." [14]

"Without the New Message from God, humanity would fall into grave conflicts and precipitous decline, making you vulnerable to foreign powers who are already in this world to gain influence and authority here. People do not realize they are standing at the precipice, not only of great change, but also of subjugation. This is the Greater Darkness in the world, a Greater Darkness that most people are too afraid to even think about. But it is something that humanity must prepare for, and that is why God has given a New Revelation." [6]

"God is sending only one Revelation to the world. Any other revelation is either a human invention or is a manipulation from those races who are intervening in the world today. You cannot come to God on your terms. You cannot determine the nature and the rules of engagement. You can only come to God on God’s terms, and God is establishing the terms in such a way that people will become stronger, more compassionate, more powerful, more engaged in the world and more cooperative with one another. " [13]

"God’s New Revelation is more expansive and inclusive and detailed than anything that has ever been brought to the world before. It is being given at a time when the human family has become literate and is participating in a world civilization and economy with international communication. It is a very different environment than any of the previous Revelations, which were very regional in nature and which only spread over a great span of time and through much discord, conflict and violence." [16]

"This Revelation is complete and comprehensive, touching on nearly every aspect of an individual’s life and the life of humanity, both now and in the future." [16]