"All the great Messengers have been denied and ridiculed, persecuted and even killed because people could not hear, they could not feel." [1] 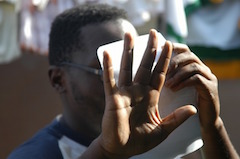 "Those who are visionary and who can see what is coming over the horizon are condemned as being negative, unspiritual or doomsday people. Your visionaries are discarded, ignored or vilified while everyone continues to devastate the world, to deplete its resources and to diminish its future possibilities." [2]

"Could the Native American peoples understand the intricacies and competition between European nations? ... like yourselves, the Natives could not respond because it was outside the realm of their world view. It did not fit with their beliefs or understanding, and so such revelations, to the extent they could be made available to people, were largely rejected or ignored." [3]

"Your obstacles must be recognized in order for you to see beyond them. If they are ignored or denied, if they are protected or called by other names, you will not realize the nature of your restraint.You will not understand that which oppresses you." [4]

“Depression, cynicism, ambivalence—these are all the result of not taking action around things that one recognizes to be important. The awareness was not fulfilled, and, as a result, it becomes dark. It becomes clouded, and the inspiration is lost.” [5]