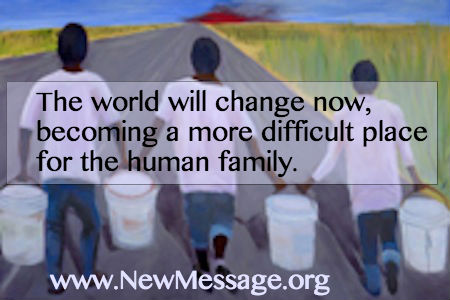 “God will not let you be close to God because God wants you to be here. The Angels will not let you be close to them because if you become close to them, you will not want to be in this world with all of its difficulties, its fragmented relationships, its problematic human relationships. God wants to turn your eyes to the world, but with the power and the presence of Knowledge to guide you.” [18]

"The contradiction of living in this world is that it is a hiding place." [19]

"If you were not in this world, it would be so much easier to make proper decisions. But you are here.You have taken on the natural inhabitancy of this world in a physical body, but the possibility of true perception still exists." [20]

"Why would you escape the world when it holds part of the answer that you yourself cannot provide? Why would you seek to become spiritually superior to everyone else when The Way of Knowledge will join you with everyone else and emphasize that which is common to all? [21]

"The world has what you need only insofar as it can give you the opportunity to give, to engage yourself fully and to avoid the little preoccupations, addictions and difficulties that keep people in chains here." [22]

"The world is a place where you have come to serve, to give and to reunite with those whom you are destined to meet, to know and to participate with."... "The world is primarily a place to give."... "You have come from beyond the world bearing gifts for the world."... "Instead of a place to proclaim yourself and to establish yourself, it is a place to get something done behind the scenes, in secret, without recognition and acclaim." [23]

"Anything can happen to you while you are here. Yet Knowledge will protect you if you can respond to it. Knowledge will lead you to the right people and will develop slowly and carefully the right understanding if you are patient, persistent and honest in your approach." [24]

"God is not managing the world. God is not creating the catastrophes, the storms, the earthquakes, the floods, the droughts. God is watching to see how humanity will deal with a world it has changed—a new world, a new and unpredictable world." [25]

"Honor the world because without your judgment you will realize it is a place of grace, a place of beauty and a place that blesses you as you learn to bless it." [27]

"Do not, then, condemn the world when in fact it creates the right conditions for your redemption." [8]