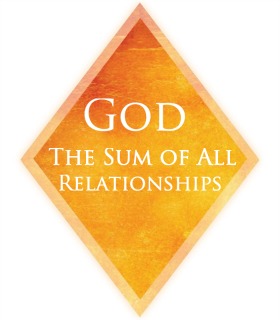 "All the great religions of the world have a common Source, and they have all been altered substantially through human manipulation—by being united with powers of the state and social customs and values and so forth.

But at the heart of them all is this deeper connection to this greater Intelligence We call Knowledge."[1]

"Though every religion has been started by God, they have all been changed by people, even to the point that their initial intent has been lost. But in essence, God has initiated all the world’s religions to enable human civilization to grow and become stronger."[2]

"The religions of the world hold the key to human dedication and human allegiance, more than governments, more than any other institution. This speaks well for humanity because religions such as these are often hard to find in the Greater Community. Your world is rich in this respect, but your strength is also where you are weak and vulnerable." [3]

"Here you must understand that the world’s religions are all part of a Greater Plan. And while they are distinct from one another in certain ways, their distinction represents their unique contribution to the growing wisdom and compassion and ethics of the human family." [4]

"The great religions have kept humanity going, have built human civilization, have been an inspiration for countless people. Do not think they are without value, despite all that has been done in violation of them, and how they have been misused and are being misused even at this day." [5]

The mandate for respect among religions

"You must honor them all despite all that has been done to change them and misuse them by governments and ambitious individuals over the course of time. "[6]

"They each have a contribution to make. They are all important. One is not greater than another. To think like this is not to understand the Will of Heaven, for it is only a united humanity that will be able to contend with the challenges of living in a new world and with the greater challenges of preserving your freedom and sovereignty amidst the presence of greater forces in the universe."[7]

"There are many spiritual communities that are not spiritual communities. They are simply an environment where one person is worshipped, and everyone else is subservient. You are aware of the examples of this. That is because people are fixated on hero worship and do not know how to join with each other meaningfully."[8]

Ancient traditions in the face of an entirely new reality

"The great traditions of antiquity cannot prepare you for what is coming, for that is not their purpose and design, you see."[6]

"The great traditions of the past cannot prepare humanity for living in a new world, where great compassion and cooperation will have to be established if humanity is to survive in a world of diminished resources, of violent weather and of environmental change. Here there cannot be competition between the religions of the world." [9] 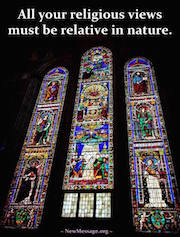 "Most religions of the world are based on an anthropocentric view of the universe. Consequently, as the presence of Greater Community forces in the world becomes more obvious and apparent, more acceptable and more generally recognized, people will either yield to a larger viewpoint and open themselves to re-evaluate their ideas and their fundamental beliefs, or they will try to reassert their religious ideas, thinking that they are in the right and that the rest of the universe somehow is in the wrong. They will think that they are blessed and guided by their religious faith, while the rest of the universe has either been spiritually denied or has been too foolish to respond." [11]

"This New Message from the Creator of all life is not here to replace or to displace the world’s religions but to give them a greater dimension, to give them a vision of what is coming over the horizon and to prepare them for humanity’s encounter with a Greater Community of intelligent life in the Universe." [12]