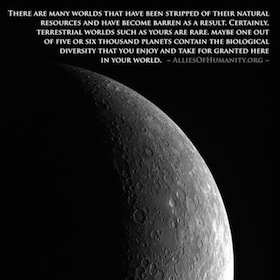 "In understanding that all races must seek resources, you can begin to understand why anyone would come to your world." [1]

"Resources are precious in the universe--mineral resources, water resources, biological resources, food resources. Large technological societies such as the Collectives have an enormous need for resources for their own maintenance." [2]

"Many resources used in advanced forms of technology are quite rare and must be gained from afar through a complex system of trade and commerce." [3]

"You do not realize how valuable a tree is in the Greater Community, how valuable seeds are, the great need for fluids from plants and animals and the problem in securing biological resources and rare metals. That is why humanity is viewed as reckless and without wisdom." [4]

"But the world is a finite place with finite resources. If you exhaust it, you face the perils that such exhaustion will bring to you. This is a truth of life in the physical Universe. You cannot escape it, whether you are a human being or whether you are a race living in another world, for the laws of nature hold true everywhere." [5]

"Look at the way you live and the way you travel and see how you can conserve resources. This will be necessary not only to make a small but important contribution to the world, but also to give you greater stability in the future when essential resources will become more scarce and more expensive. Do not think if you are a great consumer of energy and resources that you can promote peace in the world, for over-consumption of resources is really the engine of war." [6]

"For you are now living in a world of declining resources, a world whose climate has been seriously affected, a world whose ecological condition is deteriorating, a world where humanity will have to face the prospects of great shortages of food and water and the risks of disease and illness on a very large scale, even affecting the wealthy nations of the world." [7]

"The need to secure your resources will become the predominating focus of this century and of the times to come." [1]

"If you empty the well, the well is dry. If you do not farm correctly, the soil blows away. If you burn too many things into the environment, the weather changes. If you overexploit the world for resources, the resources disappear. It does not take a genius to figure this out." [9]

"With the deterioration of your natural environment and the rapid depletion of your essential resources, you are moving into a position of extreme vulnerability and powerlessness in the universe." [10]

Technology Will Not Save Us

"Resource acquisition is a problem for all advancing nations. Technology requires resources. The greater the technology, the greater the resources that are required." [1]

"Here advanced technology makes you even more vulnerable to foreign persuasion and control. If you need rare elements that can only be found in remote regions or which are only possessed by certain races, then you must accommodate their needs, demands and preferences in order to be privileged to receive such resources. The competition for these resources would be intense." [12]

The Universe Is Not Ours For The Taking

"The idea that humanity will go out and search an empty universe for resources is completely false and really represents a very dangerous and even fatal assumption." [1]

"If you must go beyond your world to seek the resources you need to live, then you will lose much of your power to others." [13]

"People think the universe is just a huge empty place awaiting exploration, containing new worlds with vast resources—there for the taking. But you would not have to travel far beyond this solar system to discover that other places of value are already owned by others and that long-standing rules of engagement have been established as to who can visit these places and who has priority over them." [14]

"In the Greater Community, you are dealing with an adult environment where the need for resources is ever present and is extremely pressing." [1]

"Trade and competition for resources, for alliances and for worlds that have strategic value, are considerable." [15]

"The need for resources is experienced everywhere, and many technological societies have outstripped their world’s natural resources and must trade, barter and travel to gain what they need. It is a very complicated situation. Many alliances are formed and conflicts do occur." [16]

"A highly advanced technological society would fail quickly without constant inputs of technology and resources." [3]

"Many races who are now involved in intergalactic travel exhausted their world's resources long ago. In some cases, they have compromised the productivity of other worlds." [17]

"There are many worlds that have been stripped of their natural resources and have become barren as a result. Certainly, terrestrial worlds such as yours are rare, maybe one out of ﬁve or six thousand planets contain the biological diversity that you enjoy and take for granted here in your world. That still accounts for many planets in the universe. But such planets are always occupied, are always valued and the native races always have to defend their rights, their privileges and their stewardship as they begin to emerge into the Greater Community."[18]

The Importance Of Biological Resources

"Why do your visitors want your world? It is so very obvious. It is not you they are interested in particularly. It is the biological resources of your world." [19]

Earth "is a world that contains immense biological resources, lifegiving resources, resources that are rare and difficult to find in a Greater Community of barren worlds." [13]

"Those who are intervening in your world today are not interested in the resources that you hold most dear. They are interested in biological resources, particularly those resources that represent the building blocks of life—genetic agents, chlorophyll, blood and plasma. These are the things that are valuable and are greatly needed in a universe full of barren worlds." [20]