"Individuals who live violent or destructive lives, they will have a much longer journey to take and will have to perform a far greater service to humanity to redeem themselves." [1]

"Even the most dreadful or violent person in the world has at the center of them what God has created. Their ignorance, their rebellion, is the source of their frustration, ignorance and violence upon the world." [1]

"You are asked to end your ceaseless conflicts and to never think that you can conduct violence here on Earth in the name of God, for that is an abomination. There are no holy warriors. There is nothing holy about war." [2] 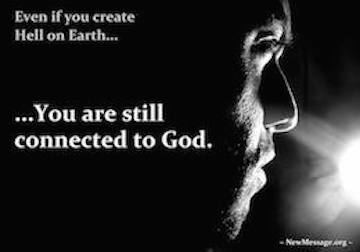 The contrast between violence and Knowledge

"If you are guided by the power of Knowledge within yourself, the deeper intelligence that God has placed within you, then there can be no violence or war and conflict. There is only the effort to create positive and mutually beneficial arrangements with others." [2]

"It is only this Great Faith that is unaffected by the past—by the turbulent, violent and grave history of the human family." [3]

"You have come to help save the world, to give humanity a future and to give your race a greater opportunity—an opportunity to unite, to develop and to become stronger, wiser and more capable, an opportunity to outgrow its tribal divisiveness, its religious fanaticism, its violence, its selfishness and its self-indulgence." [4]

“What God has placed within you is not violent. It is not hateful. It does not seek revenge. It is not filled with a cruel ideology that will only oppress the next generation. It is because it has come from God. It is not a human invention. It is not simply a projection of human psychology. It is something that has grace and power, patience, courage and fortitude. This will be needed to build a new nation, to bring about social justice and to convince people who are opposed to you that you are there to enrich their lives as well.” [6]

"If people would listen to each other, really, without simply reacting, you would have far less misunderstanding, far less violence and far less conflict in the world today. This is a fundamental skill. You must see beyond your judgments and your reactions. You must gain a greater control over your mind, or you will not be able to see, hear and know the truth about anything." [7]

"If you think that the world is about to blow up and you are desperate to do something about it, your contribution will be violent. You will be forced to take sides, and you will have enemies. The Mystery does not think like this. It does not have enemies. It merely has people who are not willing to move, so it works around them. It is like the air that comes in through all the cracks." [8]

The perpetuation of violence

"It is not enough to overthrow the forces of oppression, for this leads to violence and great loss of life and suffering and too often only ushers in a different set of faces, a new lineage of oppressive rulers. How many people have sacrificed their lives and their well-being and their opportunity only to usher in a new and even more dangerous form of oppression?" [6]

"While people abhor violence, and condemn violence, and seek ultimate punishment for those who are engaged in certain kinds of violence, people love to watch violent movies, or pay close attention to catastrophes or battles or wars, as if they have an appetite and a thirst for violence. You see this all around you. It is not a mystery. Look at the movies that people watch. Look at what is portrayed in the news media. Look at what fascinates peoples' imagination. As long as there seems to be justice in violence, violence is often condoned. If violence appears to be unjust, it is condemned. But what about the violence within the person, within the people who are engaged in violent activity? What about the violence within you?" [5]

"In a civilized state, peoples' more dangerous tendencies are held in check—through social structures, through civil expectations, through even a moderate degree of affluence, through retribution or facing the consequences of failure. Through the threat of imprisonment or social rejection, peoples' more dangerous tendencies are held in check. So here civilization has a moderating effect overall even if the civilization is full of difficulties. But the real problem of violence within yourself is not being resolved, even if its outward manifestations are held in check. It is still there to haunt you. It is still there to endanger you, to lead you to self-destructive behaviors and to make miserable mistakes in your life." [5]

"You are in this situation without the strength and the power that God has placed within you, in the deeper Knowledge within you. And as a result, you are aggressive or you are submissive; you are hateful but pretend to be loving; you are full of uncertainty and conflict; you are aggravated by innumerable things. And if life takes away too many of your advantages, you become violent and dangerous; you engage in self-destructive behaviors; you admonish and reject other people…You have all of this pathology within yourself, even if you appear to the outside to be very much in control and very smooth, claiming to be aware and spiritual and enlightened. That pathology is still there." [5]

Quotes About violence and redemption

In the Great Waves of Change

"In facing the Great Waves of change that are coming to the world, which will create great pressure on people and great difficulty even in the wealthy nations, the veneer of civility will wash away, revealing the deeper and more genuine state of people at this time. People who are cultured and polite will become angry and vengeful. People who seem sophisticated will act like animals. The Great Waves of change—which will bring violent weather, the depletion of resources, increasing economic and political instability and the growing risk of conflict and war, the darkening of the world—will push people over the edge. Tolerance will melt away like ice in the sun, and the potential for violence not only between nations but between people—between groups of people—will escalate, requiring more government control and suppression of personal freedom." [5]

Quotes about violence in defense of the innocent

"The only time that violent behavior is appropriate is in defense of the innocent. But this must be carefully understood, for it is so easily misunderstood. To protect the weak and the innocent against a brutal force or oppression or the risk of death, then violent resistance is appropriate. But it can have no political motivations nor religious ideology behind it. It must merely be to protect the innocent." [10]

Quotes About violence in the Greater Community

"It will take great sobriety and objectivity in order to see through these deceptions and these difficulties. It will be necessary for people to do this if humanity is to successfully emerge into the Greater Community and maintain its freedom and its self-determination in an environment of greater influences and greater forces. In this, your world could be overtaken without firing a shot, for violence is considered primitive and crude and is rarely employed in matters such as this." [11]

Manipulation by the alien Intervention

"This is a very difficult and dangerous situation, for the visitors will use human allegiance and their human emissaries to carry out their destructive activities in the world. It will not be the visitors who will destroy those who will not and cannot cooperate. It will be the visitors’ human counterparts, their human representatives, who will carry out such destruction. In this way, the real nature and purpose of the Intervention remains hidden and such acts of violence will simply be attributed to human error and to human violence and demonstrate the need for the Intervention. For the visitors again will say, “Look at these terrible acts of violence! We are not violent. We do not come with weapons of war. We do not destroy you. This is the result of human ignorance and human depravity. We will teach you how to outgrow all of these things.” So even the violence that is perpetrated by the Intervention will be used by the visitors to support their superiority and to contribute to the illusion that they themselves do not use deception, manipulation or force to gain their advantage." [12]

"Such zealous people will rally a movement of strict adherence and will draw out those who oppose such a strict adherence. Violence will be wrought upon the unbelievers, and they shall be cast aside.. In this way, through the eyes of the Intervention, those who oppose the Intervention and those who cannot willingly support it will be identified and will be sorted out amongst the many people who dwell in your world. And the sifting will happen at the level of human interaction. And having gained now a network of human representatives who are zealous in supporting and advancing their religious causes, the Intervention will use these individuals as the medium through which violence will be perpetrated. All the while, the visitors will remain seemingly above and beyond such activity and behavior." [12]