"Those who wish to further the advancement of the world will attempt to fortify the goodness of humanity and the sense that humanity is one community that must nurture and support itself beyond all division of nation, race, religion, culture and tribe." [1]

"You who have the opportunity to hear and to prepare and to respond with God’s New Revelation, you have the opportunity to gain the vision, to gain the awareness, to gain the strength, to gain the power of Knowledge, but you must step aside from the culture. For it is not responding; it is not preparing; it is not gaining vision. It is lost—a great tragedy, the misuse of so much intelligence, skill and talent, wasted and lost because people do not have the strength and the courage to respond. People think a new political party, a different ideology, is going to make things different, but they are not solving the problem at the level at which it exists. This will only delay the time in which humanity can prepare." [2]

"Your culture is very much involved in hero worship, and so everyone is denigrated except for a few individuals who are endowed with supernatural powers and who are considered godlike. This is a cultural defect in your societies, and it is a defect born of the nature of human development. The Greater Community will temper such an understanding and such an approach, for you will see that what appears godlike is simply a more advanced state. And in the future the Greater Community, being a far greater arena of life, will demonstrate what higher levels of intelligence really look like. 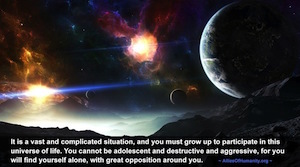 "The Greater Community will provide contrast and an environment for learning that is unparalleled in your past. Yet it holds greater risks as well. Humanity must outgrow its adolescent stage of development where it proudly flaunts its newfound powers but cannot work together as a group. Its social cohesion is being splintered now. It is losing its tribal identity, but it has not been able to find a greater foundation upon which to stand together. For humanity to become unified, individuals must become unified, within themselves and with other people." [3]