"'What is creation?' Creation is all that God has created within time and beyond time." [1]

"Humanity is not the centerpiece of the Creation, only one of its developing aspects. This represents a tremendous breakthrough in understanding. This represents a great threshold in self-realization and the ability to effectively engage with the world." [2]

"The world is driven by powerful geologic and biologic forces. They were set in motion at the beginning of the physical Universe. God has set them in motion to operate on their own, moving in a certain direction." [3]

“For you, Creation is the physical universe. It seems to be forever, but it is really temporary. It has a beginning, a middle and an end. You have not even reached the middle spot of this expanding universe, so this is something that is confounding to your understanding.” [1]

"You must see that God is not operating all the functions of the world, for these were set in motion at the beginning of time. There is no conflict here between creation and evolution. And there is really no conflict between religion and science." [4]

The Plan to End Separation

“Creation is complete, and your temporary experience in this temporary reality that you call the physical universe is but a tiny part of God’s permanent Creation, a Creation that you cannot yet experience clearly for yourself, even though you might have glimpses here and there.” [1] 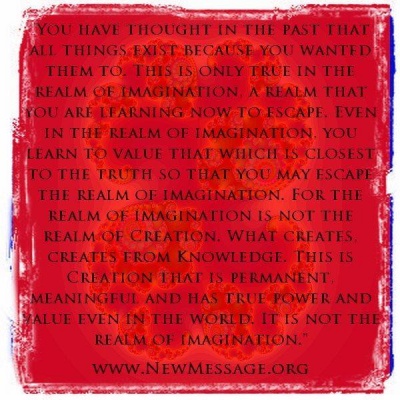 “You are already surrounded by the permanent Creation, but your eyes cannot see it, your ears cannot hear it, and your fingers cannot touch it because your senses were only established to recognize physical things and things that are moving—objects that are moving and sounds that are changing. The greater reality in which you live is all around you. You have never left it, but given your reliance upon your senses, you cannot experience it directly without a certain kind of preparation.” [1]

No Alternative to Creation

"There is no [permanent] alternative to Creation. The physical universe is an alternative to Creation, and that is why it is changing and moving, for it has a beginning, a middle and an end. You are somewhere in the middle in the great span of Creation. Only a very small part of Creation is involved in manifest life. But to you, of course, it is immense and incomprehensible, as it should be. It is not possible for your intellect to comprehend the scope and the magnitude of this." [7]