"Humanity is changing the chemistry of the Earth’s climate to such an extent that the world will adapt to a new equilibrium, an equilibrium that is unfavorable to human habitation." [1]

"The climates of the world have now been disrupted, which will bring great havoc upon peoples everywhere, disturbing the natural balance to such an extent that it will produce unfavorable conditions for the human family." [2] 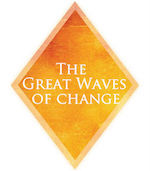 "You must pay attention to changing climate and violent weather." [3]

"Millions of people will have to flee the arid regions of the world. Coastal regions will be flooded and impacted by tremendously powerful storms and violent weather. People will have to move due to economic reasons—failure of local economies and in some cases national economies." [4]

"If you live in a desert region, you may have to leave, as there may be no water for you in the future, and it may be very difficult for food to reach your community. Do not live near moving water, near rivers that will overflow in the face of violent weather and changing climate conditions. It is wise to move away from coastal regions that will be affected by violent weather and in many cases from certain large cities that will be subject to extreme social unrest." [5]

"In the future, food will become more difficult to grow, more difficult to distribute, become a subject of contention, competition and conflict. Nations will hoard their productivity or only sell their surplus to other favored nations. There will be less food available for the world. Changing climate will have an ever greater destructive force on humanity’s ability to produce adequate food. And water resources will become ever more scarce, both in the drier regions of the world, and in providing the source of rivers. You can see this today if you will look. It is not a fantasy. It is not a conspiracy. It is not the machination of governments or leaders." [2]